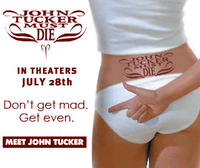 A new teen movie comes out July 28th called “John Tucker Must Die”. I half-watched the trailer and just before dismissing it noticed the URL at the end wasn’t the ridiculously long “heresour URLtitle butwedidnt registerit first-themovie.com” format that drives me nuts. Where are they sending interested parties? MySpace.

A chance to interact with potential fans and get the word out through social networking is brilliant. Let’s just hope the move is well received by MySpacers… otherwise their comment box is going to look something like the old Date Movie MySpace page (which has been edited SEVERELY to remove negative comments).

And while I have your attention — if you like revenge movies check out Norm MacDonald’s “Dirty Work“, featuring Norm and his half-brother (played by Artie Lange) that start a revenge-for-hire business. It’s not Caddyshack (although it does have Chevy Chase in it), but it does provide a low brow chuckle or ten.