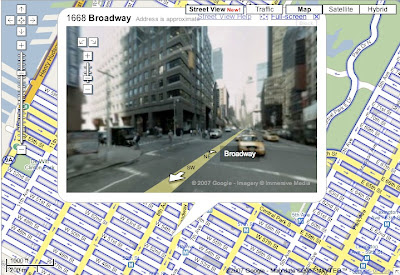 I had an accounting professor in college who, while explaining his methodology for teaching the course, said that people learn in one of two ways: Mile roads and Land marks. For those unfamiliar with mile roads, the metro Detroit area’s east-west streets, starting in the City, are marked by miles (although aside from Three Mile, a side street on the east side of Detroit, there aren’t “Two Mile” or “Four Mile” Roads. Those who’ve seen the movie Eight Mile know that’s the east-west line that separates Detroit from the suburbs (can I get an East Siiiide?).

His theory is that some people get literal, others are visual, which makes complete sense. In fact, I actually learned accounting in his course and understand the principles, even after “passing” my accounting 101 course (that Mile road bastard). Literally, it means you may understand if I told you to take 6th Avenue north to 51st Street, head west for two blocks before turning northeast onto Broadway. Simple now that I’m a transplant New Yorker.

Others might understand if I said to go toward Central Park and turn left at the block past Radio City Music Hall, then another right when you see McDonald’s. Again, easy, but not everyone follows directions the same way.

Understanding that some people are left-brained and others are right-, Google introduced a new feature as part of Google Maps called “Street View”. One of my complaints with online maps and GPS systems is that there’s not a lot of fair warning before you’re supposed to turn, stop, etc., and occasionally you’ll end up missing a turn… or driving two miles per hour, looking for signs like a Grandma. Street View eliminates this dilemma by allowing you to click directional arrows at intersections to see what the drive is going to look like ahead of time. Pretty handy stuff, especially for n00bs in unfamiliar territory.

Seth Godin was asking during a speech at Google about how to differentiate their offerings. He specifically responded with his take on Google Maps – I wonder if his statement would hold true now that they’re ahead of Yahoo Maps et al?