When perception is everything (or, when the numbers lie)

A poll on ESPN’s homepage is asking voters to choose, city by city, which sports team matters the most in that town. Today’s poll features my hometown of (metro) Detroit. Why I put metro in parenthesis is another debate (3.5 million people live outside of the City itself, yet rather than say “Warren”, “Canton” or “Taylor” people just say “Detroit”. Odd.)

The current results, voted on by fans nationwide, shows that the Red Wings are what team is perceived to be the most important to the city. And while the Wings have had a lot of success since the mid-to-late 1990s, the numbers involved in this polling are nearly the opposite of what teams matter most to Detroiters.

Have a look at the current results: 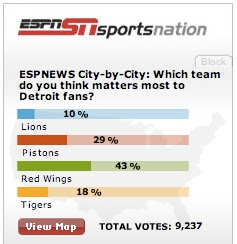 The Pistons are perceived as being #2, Tigers #3 and Lions last. If you’re looking at the latest records for the teams you’d guess the same thing.

But look at the poll results as broken down by state:

Apparently there are a lot of Michiganders living in Alaska, which is odd, but I digress…

Those of us who’ve been in Detroit since the NHL lockout know that Wings tickets, even in the playoffs, were easy to come by this past season. The Pistons were still selling tickets and while attendance at the CoPa has been high since the team started winning, the real team people care about is the Lions. Detroit is a football town, but without living there you’d never know it. The Lions have a few modern eras, easily broken down by pre- and post- Barry Sanders. The rest is pretty forgettable, from the 1980s “Another One Bites The Dust” debacle to the Paul Edinger kick in 2000 that cost Gary Moeller his job to last year’s 3-13 season.

They’ve said for years that if the Lions ever won the Superbowl that the city would burn riot celebrate like no city has ever celebrated before. Racial and economic divides would be forgotten for a few hours and fans would forget about a bad economy and half a century of losing to feel the pride several other cities and fans have felt over the last 50 plus years.

Want proof? There’s one key stat that Lions fans are well aware of: the Lions always draw well. Even when they played in the 80,000 seat Pontiac Silverdome and were awful, they still sold out. The promise of a better year, the hope that is next year’s NFL Draft (also known as the Superbowl in Detroit), keeps people coming back to Ford Field — which, coincidentally, is around 20,000 seats smaller, keeps tickets in demand and prices high to see a bad team.

The real number is $839MM. That’s what the Leos are worth according to Forbes, and the Silver and Black attack are 21st in the League in revenue. You don’t make $839MM if fans aren’t coming through the gates, bringing in TV revenue and selling, in the words of long time Detroit sports personality Art Regner, “Lions leather”.

Compare that with the other sports teams (Pistons at $402MM, Tigers at $292MM, and Red Wings at $258MM) and you’ll see that in this case perception is everything but at the end of the day money talks.